Why did gizmodo redesign the entire website?
Gawker media CEO Nick Denton requested the change. It has been suggested by some that the staff of gawker protested the move, but at the end of the day its all trickle down.

Its not very good and I hate going there now, why do they keep it?
Because they’re hopeful. The projections suggest they plan to “wait and see”. However, at the moment this is far from whats happening as one can see here: 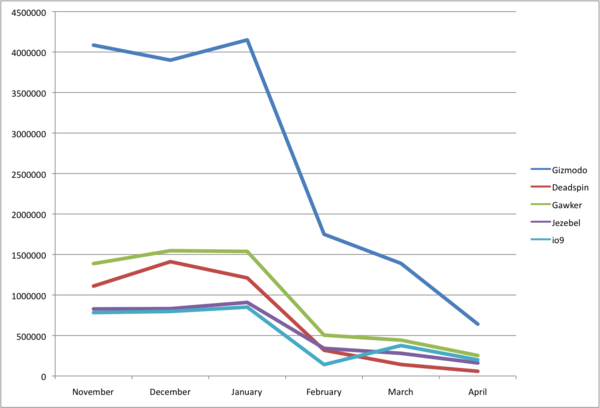 Most times the google search results don’t actually point to the correct gizmodo articles like it says it should, why?
This is possibly due to the Google search algorithm update speed or, more likely, the territory redirect system that is embeded in the gawker redesign. Users of gizmodo in Canada and the UK have confirmed that clicking through from a Google link to Gizmodo articles results in a blank page or similarly unpleasant outcome. This in turn has led some to click the “remove from google search results” button on google search (which was part of the panda google update). Pressing this link in gogole search will remove ALL gizmodo links from your future search results.

How can I fix gizmodo links in google search?
First, click the link as usual, then change the TLD to something else. For example, if its .co.uk try changing it to .com. This may or may not work and to be honest, its probably not worth it given the content. Alternatively, click “cache” on google and then all text.

How have the changes affected Gawker media inc?
Well, its head in the sand as usual for tech comapnies that make a big design change on their site. Rememebr Digg? me neither.

Any Nerdr future predictions?
At the moment, i’d describe the redesign as a disaster in terms of user satisfaction. However, the changes would have clearly resulted in some better targeting of users (geotargeting for example), thereby resulting in at least some increased advertising revenue per CPM (cost per mille – [mille=1000]).

The user base has dropped from about 8 million a month to approx 2 million a month according to the chart above. Thats a fairly huge drop. The regulars will have left, the fans will have stayed and the uniques from google have reduced somewhat. Regulars will only return from a revertion of the design, but one must ask how many of these guys are there and just how much revenue are those guys generating? Its well known in the advertising business model that uniques are worth a lot more than repeat visitors. Both Gizmodo fans will be staying no doubt. Leaving the majority base as being Google uniques, which I would say is the new target audiance, just like digg.

In conclusion then, I don’t think its going to get better. I suggest its a plan to reduce costs, maximize ad revenue and ride it out into the sunset.


This entry was posted in Technology and tagged gawker, gizmodo, Nick-Denton, redesign. Bookmark the permalink.